From the production of Without A Trace by Sounds of Progress, Glasgow, Fall 2002 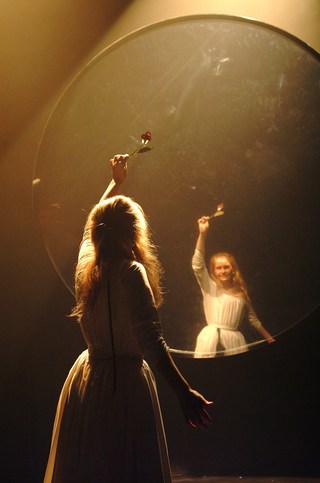 A two act play about the tragic relationship of the charismatic Dr. Franz Mesmer and his famous patient, the blind pianist, Maria Theresa Paradies (for whom Mozart wrote the 'Paradies Concerto'). The scandal that drove Mesmer out of Vienna and then Paris and drove Maria back to blindness is the hub of a battle between the forces of mechanistic science and the insightful vision of the artist. The play begins at the “Concert of the Blind Pianist”, April, 1784 in the Tuileries, Paris, where Mesmer's trial is conducted by Benjamin Franklin and moves into the memory of its star witness: MARIA Paradeis and her experiences in the cruel world of Vienna where she briefly regained her sight.
5 MEN, 3 WOMEN. Unit set, minimal scenery.

Reviews of Without A Trace

“From beginning to end this is a lucid and poetic production, full of humanity and honesty, opening our eyes to the on-going conflict between art and science, and becoming a philosophical debate on the value of sight. Peter Kelly as the doctor caught between art and science, understanding and respecting both, is as genuinely and gently human as Karina Jones’ Maria is fragile and vulnerable. The sincerity of their performances makes even more cogent the mutual trust of their characters’ relationship. BELIEVE IT. SEE IT.”
Gareth Davies, THE LIST

“The relationship between Mesmer and his patient was a fascinating one as portrayed here. Played by a brilliant Peter Kelly, we saw how the maverick medic needed his most famous patient as much as she needed him...an unusual and entertaining show, fluently directed by Gerda Stevenson. It was, mesmerizing!”
Kenneth Spiers, THE MAIL ON SUNDAY

“This latest show from the Sounds of Progress mixed-ability music theatre company has all the hallmarks of a major event in Scottish theatre. Directed by Gerda Stevenson, it has a beautiful haunting stage design by Richard Aylwin magically lit by Gerry jenkinson, together with exquisite music by Dee Isaacs.” Joyce MacMillan, THE SCOTSMAN

“One of the real strengths of the drama is that it does not rely simply upon our fascination with the big historical players. Mack’s Mozart, for example, has a lesser role than Maria’s desperate father, and exhibits an even greater capacity for eccentricity than we see in Peter Shaffer’s play Amadeus... Director Gerda Stevenson has brought all this together in a beautifully atmospheric production. Richard Aylwin’s appropriately simple set, complete with a fabulous movable two-way mirror, is enveloped constantly in Gerry Jenkinson’s subtle and responsive light.”
Mark Brown, SCOTLAND ON SUNDAY