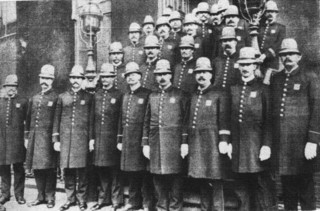 Members of the NYC police force in 1895. Of the 12 Jewish policemen selected by Roosevelt to protect the rights of free speech was the playwright's great grandfather. 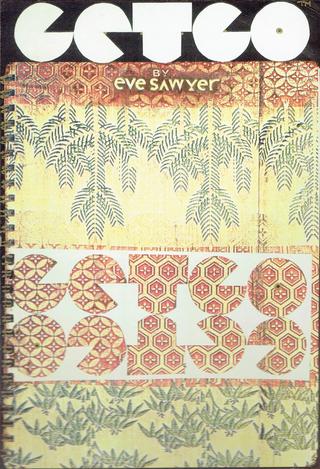 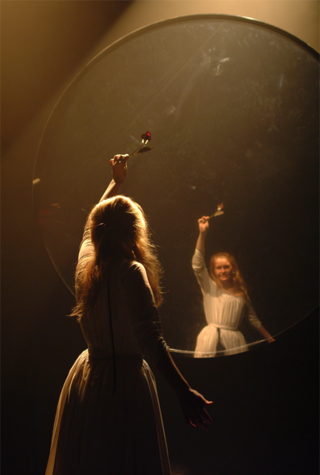 Maria Paradeis holding up a candle to view herself in a mirror for the first time. 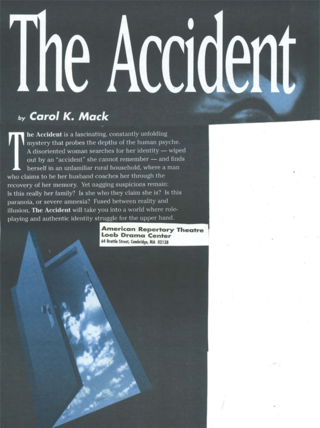 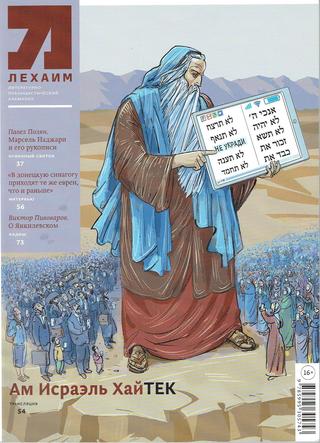 SEVEN, a theatre piece published by Dramatists Play Service, is a project of seven playwrights: Carol K. Mack, Paula Cizmar, Catherine Filloux, Susan Yankowitz, Gail Kriegel, Ruth Margraff and Anna Deavere Smith. We each interviewed one of seven women leaders from all corners of the globe and we then wove their remarkable stories together in an inspiring documentary theatre piece which opened to the public at the 92nd Street Y in New York City on January 21, 2008, Martin Luther King Day and has since traveled round the world. For more details see www.seventheplay.com

Commissioned by Theater J, Washington, D.C. this play is a recipient of a grant from the National Foundation for Jewish Culture. The play takes place in 1895 when Theodore Roosevelt was Police Commissioner of New York City. Herr Ahlwardt, a rabidly anti-Semitic member of the Reichstag came from Berlin with the announced purpose of “preaching against the Jews” and he demanded protection. Roosevelt assigned a group of Jewish policemen to be his bodyguards and protect his right to freedom of speech. THE VISITOR is about these policemen, this historical event and its significance.
One Set, 6 actors.

GETGO (or Where the Road Goes by Hot-Mic)

A two act, dark but highly entertaining farce about a voracious, hi-tech, multinational corporation called G.E.T.G.O. (an acronym that changes meaning often) and a painter EVE SAWYER (the protagonist and the pseudonymous author of the play) who comes to protest its destructive activities and gets trapped inside the labyrinth. The entire play takes place in corporate headquarters where G.E.T.G.O.'s first annual art exhibit is being held. When the audience enters the lobby, they enter G.E.T.G.O.'s game and when they leave, the world will never seem quite the same again. Like EVE, they discover they can’t get out. The play is based on a real incident.
2 MEN, 2 WOMEN. SET is done with projections.

“The relationship between Mesmer and his patient was a fascinating one as portrayed here. Played by a brilliant Peter Kelly, we saw how the maverick medic needed his most famous patient as much as she needed him...an unusual and entertaining show, fluently directed by Gerda Stevenson. It was, mesmerizing!”
Kenneth Spiers, THE MAIL ON SUNDAY.
"From beginning to end this is a lucid and poetic play, full of humanity and honesty, opening our eyes to the on-going conflict between art and science, and becoming a philosophical debate on the value of sight. "What stirs us most profoundly is invisible," Mesmer says." The List


WITHOUT A TRACE is a two act play about the tragic relationship of the charismatic Dr. Franz Mesmer and his famous patient, the blind pianist, Maria Theresa Paradies (for whom Mozart wrote the 'Paradies Concerto'). The scandal that drove Mesmer out of Vienna and then Paris and drove Maria back to blindness is the hub of a battle between the forces of mechanistic science and the insightful vision of the artist. The play begins at the “Concert of the Blind Pianist”, April, 1784 in the Tuileries, Paris, where Mesmer's trial is conducted by Benjamin Franklin and moves into the memory of its star witness: MARIA Paradies and her experiences in the cruel world of Vienna where she briefly regained her sight.
5 MEN, 3 WOMEN. Unit set, minimal scenery.

It is the title play of the four award-winning plays recently published.

WITHOUT A TRACE was first seen in the Humana Festival at the Actors Theatre of Louisville as IN HER SIGHT. “Mack has created a highly unusual love story...a fascinating psychological study in the tradition of EQUUS. We found ourselves mesmerized!” Daniel Selznick, Theatrescope

"Once in a very great while, a new play comes along that is genuinely new. A script that finds an original way of approaching questions which have been chewed over perhaps many times before. A play that presents us with a freshly and deeply imagined vision. Seeing such a play, we have the sense of suddenly looking out over new terrain; a new part of our collective psyche falls into place. "The Accident" by Carol K. Mack, which is receiving its world premiere production by the American Repertory Theatre in Cambridge, is such a play.
The comparisons here are to Pinter and Beckett. This is a challenging, fascinating, elliptical play...It is stunning and inexplicable in its power."
The Patriot Ledger.

THE ACCIDENT is a full length play (no intermission) about a woman who awakens after a mysterious accident in a place she doesn't recognize. It is a psychological thriller about the nature of identity
It is included in the new anthology WITHOUT A TRACE & Other Plays.

Carol K. Mack's plays also include: TERRITORIAL RITES, POSTCARDS, ESTHER, and A SAFE PLACE which have premiered respectively at: The American Place Theatre, Ensemble Studio Theatre, The White Barn Theatre Foundation, and The Berkshire Theatre Festival in Association with The Kennedy Center for The Performing Arts. She is the recipient of a Stanley Award, a Beverly Hills Theatre Guild-Julie Harris Playwright Award, a Playwright Forum Award, & a residency at the Rockefeller Foundation Center at Bellagio, 1995. Her work appears in THE BEST AMERICAN SHORT PLAYS of 1986, 1990, 1994, and 2007, and in various other publications. See the About page.

My short story "The Chosen People" which was originally the recipient of a Literal Latte Fiction Award and published in Moment Magazine was translated into Russian by Vladimir Lazaris and published in a Moscow based Jewish magazine LECHAIM.